Have you seen robot vacuum cleaners making their way through people’s houses? These robotic vacuums scour the floor, collecting dust and filth before returning to their nesting docks to recharge. What sorcery is that, and how in the world do they manage to pull these “stunts” off? No, it’s not witchcraft or anything like that; it’s simply science at work.

The first robot vacuum models used rudimentary technology. They moved randomly when cleaning and could clean vast areas. However, efficiency was a real issue since they kept cleaning the same spots repeatedly.

Now, a robotic vacuum cleaner uses state-of-the-art navigation technology powered by algorithms and sensors. Instead of circling around open spaces like madmen, the technology enables the vacuum to cover all surfaces in the most efficient way possible. But before doing all that, the robot needs to “see” and map the home first, store the information, and use it for the next go-around.

What Exactly is Robot Vacuum Mapping?

Without beating around the bush, robot vacuum mapping is a function that allows the robot to produce an accurate map or blueprint of your home. As soon as they do this, the robots will have a more precise “understanding” of their cleaning routes. In more advanced models, this mapping feature enables the robot to differentiate between surfaces and assists it in avoiding previously cleaned sections.

Robot vacuum mapping technology brings many advantages. Efficiency is, of course, the foremost benefit. There are no more random cleaning patterns as the robot now understands where it needs to go and knows which area has already been cleaned.

Robot vacuums equipped with mapping technology have the potential to save battery power. Unlike robotic vacuum models without mapping technology, mapping robots can detect when their batteries are running low during a cleaning cycle. They detect infrared signals from the dock and use them to navigate their way to the base.

Sounds simple enough? Not quite. Not every robot vacuum uses the same method, so let’s get familiar with the most popular mapping technology in robot vacuums.

Robot vacuum manufacturers put their own spin on mapping technologies, but these are the most common mapping methods:

Some robot vacuums use a camera (or a time-of-flight sensor) to come up with a map of your house. This is quite a literal take on a mapping technology and can be highly accurate. The only caveat is that it doesn’t work well under dark conditions. Several manufacturers include a light source on some of their devices to address this issue. The simplest way to counteract this flaw, however, is to open the lights during the robot’s initial mapping.

Lidar means light detection and ranging. It is a remote sensing technique that measures distances using light in the form of a pulsed laser. Compared to other mapping technologies, this device provides the most reliable navigation and mapping. Lidar vacs are also better at detecting obstacles because the invisible lasers scan at ground level.

Gyroscope/Accelerometer-based mapping is the cheapest mapping technology found in robot vacuums. Gyroscope and accelerometer sensors in your home are supposed to determine distance and object orientation. However, gyroscope-equipped robot vacuums typically produce unreliable maps, and navigation is inferior to a camera or Lidar-guided device.

Some robot vacuum manufacturers make hybrid models that combine two or three mapping technologies mentioned above. Along with the sensors and cleaning algorithm, the robot cleans in a more efficient manner.

Premium models boast even more cutting-edge technologies such as DToF (direct time-of-flight), front camera, and others so they can recognize minute objects on the floor.

Mapping technologies are basically nothing without sensors, as much as Waze or Google maps are useless if the car doesn’t start. In the same vein, robot vacuums use mapping to create cleaning routes, but they utilize the help of sensors to assess floor conditions around the house. If not, robot vacuums get stuck in a heap of trouble, literally and figuratively.

Depending on the model, some robots may include more sensors, such as a dust scanner, but these pretty much cover the basic sensing techs found in robot vacuums.

Like many other technological products, the navigation engineering behind robot vacuums found inspiration in nature. 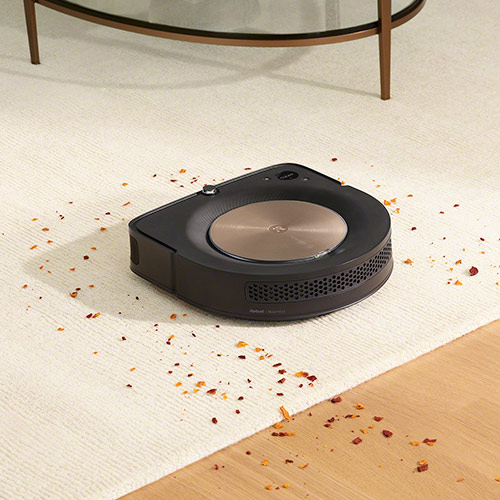 Most modern robot vacuums are the result of the research of Rodney Brooks, a roboticist at MIT and one of the founders of iRobot. Brooks was part of a new generation of artificial intelligence (AI) research that shifted away from complex tasks like teaching a computer to play chess while leaning toward the fundamentals of intelligence. Taking the ant as an example, the team wondered how this insect navigates the world while lacking the intelligence of animals in the higher order.

They discovered that these simple organisms could produce complex behaviors by adhering to a straightforward set of principles. A single ant doesn’t have much cognition, but it follows a fundamental set of rules that lets it find food, return to the nest, and lead other ants.

Similarly, a robotic vacuum doesn’t need to be aware of a room’s precise measurements to clean it. The ability to clean a room will instead come from knowing how to respond in a few different scenarios. Therefore, like an ant, a robot vacuum simply needs to “know” how to maneuver around an obstacle or “notice” that it’s going towards the edge of the stairs and react accordingly.

You have probably asked yourself, “How do vacuum cleaners work?” and wondered the same thing about their robotic counterparts. Science and engineering are always behind technological advancements; the same can be said with robot vacuums. It has gone far from its humble beginnings, slowly evolving into a household cleaning machine to be reckoned with. Some premium models utilize two or three mapping technologies while boasting a slew of other navigation features.

Nevertheless, as advanced as these technologies are, no robot vacuum is perfect. Occasionally, you’ll need to free them from wires or pull them out from under a couch. Ultimately, it doesn’t matter which navigation system your robot vacuum utilizes as long as it can satisfactorily clean your floors with the least amount of human intervention.